SCROLL DOWN FOR SHOPPING

California, USA - End of the 60`s. The Doe brothers, Mitch, Hank and John were on their way home from the Altamont Speedway Free Festival, riding on their Harleys through the desert. As usual, they just couldn`t ride fast enough, as high speeds were essential to these kamikaze riders. The beer they had drunk had also had its effect. Hank had got severely beaten in a fight that he had got himself into at the festival and he was feeling a little dazed. He was riding at the end of the convoy. Whilst Mitch and John raced against one another as usual, Hank was the only one who could actually see what happened on that day: John had a sudden back tyre blow-out, and his heavy Harley began to skid out of control. John desperately tried to regain control over his machine but failed, and was dragged along behind the bike. The crash left him with several badly broken bones as well as several cuts and grazes. After a long period of rehabilitation in hospital, it was clear to John that he`d never be able to ride a motorbike again. So that he didn`t have to completely turn his back on his passion for bikes, John founded a small biker fashion label together with his brother a year later. As well as T-Shirts and jackets, printed with cool images, the brothers began to experiment with materials that could strengthen motorcycle clothing. The idea was to develop and combine the casual 60`s look with protective materials that looked cool for bikers. Inspired by their idea, a European company bought up their small business at the end of the 90`s, and since then they have been developing clothing for motorcyclists with cut-resistant materials. Their idea was that no biker should have to go through what they had experienced back then in the Californian desert. 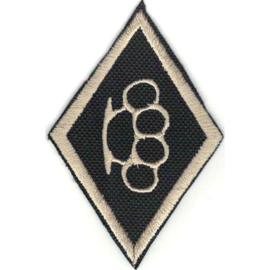