Sow or Iron it on to your biker jacket!

The knucklehead is a retronym used by enthusiasts to refer to a Harley-Davidson motorcycle engine, so named because of the distinct shape of the rocker boxes.[1] The engine is a two-cylinder, 45 degree, pushrod actuated overhead valve V-twin engine with two valves per cylinder. It was the third basic type of V-Twin engine used by Harley-Davidson, replacing the Flathead-engined VL model in 1936 as HD's top-of-the-line model. The engine was manufactured until 1947 and was replaced by the Panhead engine in 1948. The Knucklehead-engined models were originally referred to as "OHVs" by enthusiasts of the time and in Harley's official literature; the nickname arose from the California chopper culture of the late 1960s.[2] 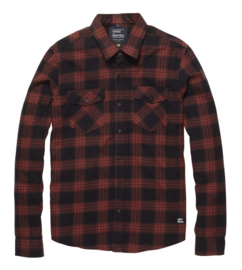